PRELIMINARY
It was the end of November 1995. The Tea Party had just completed a U.S. tour and were excited about the next album. The Edges of Twilight was closing in on double-platinum sales domestically, wrapping up a year that earned the band three Juno nominations and a MuchMusic People’s Choice Favorite Music Video award. All seemed to be well, but the success of The Edges Of Twilight couldn’t hide the fact that Jeff Martin was in a personal crisis at the time and that the band was in troubled waters – a change of management at that time being just one sign.

In retrospect, Jeff Burrows was reminded of that time:

They [the songs of TX] were all written at a time when we were going through, not only Jeff going through lyrically, personal hardship, but the band was going through bad managerial things and a bad American record company. At that point, we didn't know whether the band would even continue at some points. It was a bad vibe, but it was healthy for writing.

The mid ‘90s were also the time when bands like Massive Attack, Aphex Twin and The Prodigy celebrated great success with their mix of rock and industrial, electronic soundscapes. But the most important soundtrack for Martin’s dark mood was provided by a band whose album Martin got handed over by a friend and was supposed to build the foundation for Transmission: it was a copy of Nine Inch Nails’ album “The Downward Spiral”.

Martin was so fascinated by what he heard there that the vision of enriching his own music with electronic elements and mixing it with oriental timbres also grew in him. The idea of combining (rock) music with electronic sounds was not new, but for The Tea Party this sound cosmos was untouched, new territory – something that was about to change abruptly with Transmission.

Transmission began as an experiment of sorts in Martin’s loft studio in old Montreal, where he had previously “demoed” The Edges of Twilight. The difference, this time, was that Transmission was pieced together entirely and comfortably at Martin’s home.

“There was no clock,” explains Martin, who produced the whole album and mixed it at Morin Heights, Quebec, with the exception of three tracks which were co-mixed with Adam Kasper (Soundgarden) at NRG Studios in Los Angeles.

The organic and mechanic foils on Transmission began when Martin’s friend, English folk musician Roy Harper, gave him an old ‘80s Emulator II and Martin began messing around with it, starting with a loop sampled from a piece of Lebanese funeral music.

Over the next month, he assembled another five songs at his house and emerged with the skeletons (loops, electronic treatments and guitars) of “Psychopomp”, “Army Ants”, “Gyroscope”, “Pulse” and “Temptation”. Sound landscapes were created, and while they were at first only meant to be fiddling around, it forged a new direction for the sound of the band.

After Martin had created the framework for the songs, Burrows and Stuart Chatwood travelled to Montreal and added their instruments parts to the to the musical skeletons Martin sketched out. Both expanded their instrument repertoire once again — Chatwood learned keyboards, which play an important role on Transmission, while Burrows experimented with an electronic drum kit. 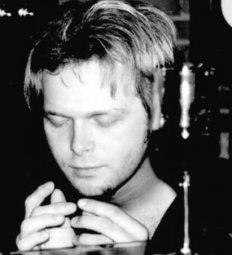 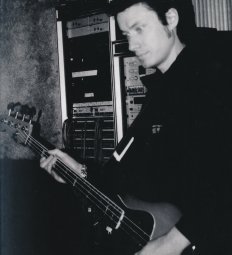 The band dared to enter new territory and take the risk of alienating old fans with the new direction. Embracing synthesizers, sampling and digital-recording techniques the trio was abandoning its previous musical prejudices, and revitalizing its evocative and intensely emotional sound with a modern approach.

We felt as a band that electro music is the last boundary we had to cross.

It was February 1996 when Burrows recorded his drum parts in the loft below Martin’s house in Montreal – a space filled with discarded restaurant equipment. Burrows knocked off his bed tracks in two days, giving the band a power on which to build further (later he would add darabouka, dumbek, pod shakers and the lead pipe to select tracks).

“Lucky enough, my landlord agreed to clear out the second floor beneath my loft, and there became the drum room and the drum sound that we all know as the backbone of Transmission,” recalls Martin. 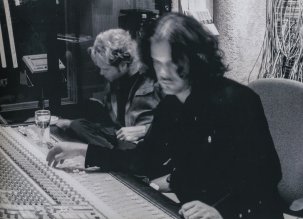 Chatwood, who plays keyboards more than bass on Transmission, had owned a sampler for four years and began adding his own “shadings” to the songs.

Martin remembers those days: “We’re just working with sounds, making our own sounds…experimenting with rhythms as well, breaks and things like that, to see how we play. We thought that these were going to be demos, when in fact, they’ve turned out to be the record.”

By the end of April 1996, after his bandmates left Montreal, half of the new album was completed without any vocals. Martin, still in his dark mood, had been documenting his existence in a “diary of madness” and set about turning it into lyrics.

On no album before and after have the lyrics been as dark as on Transmission. It began with the poem “Transmission”, which pits the glories of modern progress against the depravity parading within, not just poverty, Martin explained, but the “condition of the soul”.

Musically, Transmission melds the rock, middle eastern and electronic elements. It made for the perfect album title. The album title was also a reference to Joy Divisions song of the same name.

The idea of dropping the band name The Tea Party and renaming themselves Transmission was even briefly considered, in order to gain a better foothold on the American market, but in the end, they decided to keep their original name.

In addition to his personal crisis, Martin also dealt with social questions on the album, which were influenced by the writings of Christopher Dewdney, Canadian poet, essayist and futurist, and also a friend of Martin´s. One of his works, “The Secular Grail” inspired the song “Gyroscope” and his ideas on the nature of consciousness and psychic equilibrium infuse many of the songs on this album.

“It’s basically a collection of aphorisms on the human condition and having to deal with the juxtaposition of the new deity being technology and the old ones, the organic ones. And, also in this book, he equates a human being’s psychic equilibrium to something like a gyroscope and how the rate of spin in each particular individual is equal to their psychic energy. And like a spinning top, if outside forces affect it, it will incur a wobble and go off course. With human beings, forces like flattery or conversely, criticism, affect you in such a degree that you start to go off course and you start to shift,” says Martin.

Meanwhile, other songs on the album are also based on books Martin read at the time. For example, “Army Ants” or “Psychopomp”, which goes back to a term used by psychologist C.G. Jung.

With so many literary models, a German music magazine titled an article about Transmission with the headline “Books Instead of Drugs”. Martin admits however, that alcohol and drugs played an important role in his life before and after Transmission.

Unfortunately, I used the human body to experiment, and unfortunately it was my own

After the first songs were completed, the other five songs took shape, including two songs which took the band in a different direction. “Release” and “Aftermath” both had a beauty and ambience to them which belied their ominous lyrics. 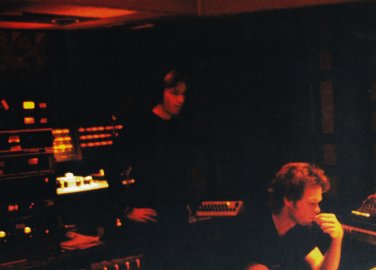 The final track of the album, “Babylon”, was recorded in in one day during the mixing phase at Morin Heights. The Tea Party’s exciting evolution from blues-rock to eastern-rock to its current hybrid of industrial-acoustic-soul was sealed.

At the end of 1996, the whole album was written und it was time to complete the final recording of the songs. These recording sessions started in January 1997 and were finished in February 1997 with the recording of the vocals. With the recordings in their luggage, the band travelled to Los Angles for three weeks in March 1997, where a large part of the album was mixed at NRG Studios. The mix was completed at Morin Heights, north of Montreal. The mastering was done by Bob Ludwig, who put the finishing touches to the album in April 1997. 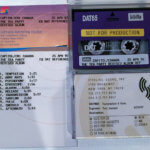 With this album the band created a dark colossus, a mixture of rock and electronics, of dark and apocalyptic structures and lyrics, always standing before the abyss and seldom seeing a glimmer of hope.

In short: The Tea Party had created a monster with Transmission, which was now ready to present to the public. The first single “Temptation”, which swore the fans to what was to come with the dark video, was the precursor.

The album was first released in Canada on June 17, 1997, followed by releases in Australia, Germany and the USA. The latter was released for the first time on the Atlantic Records label, with the goal of starting fresh and the potential for wider recognition in the USA.

The release was accompanied by concerts that could be followed live on the Internet. In 1997 this was still quite uncharted territory! The bands also played at major Canadian festivals such as Edgefest. 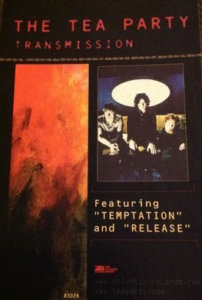 The Tea Party was also asked to open for two shows of the “Bridges To Babylon” tour of the Rolling Stones, but unfortunately this didn’t happen because Mick Jagger fell ill and the shows in Toronto and Montreal were cancelled.

The band themselves described a performance at Intimate and Interactive at the Canadian music channel MuchMusic as one of their highlights at that time. In this show the official band video for “Psychopomp” was created. The band also recorded two concerts in Sydney, Australia, to release them on a live CD, but that content has not been released to date (but a bootleg of these shows can be found in the Audio section of this website).

And even through The Edges of Twilight is right on par with Transmission, and Heaving Coming Down was their first No. 1 hit, the album is seen by many as the creative highlight of the band.

After finishing the recordings and releasing the album – which was celebrated with a 20-year anniversary tour in 2017 – Jeff Martin summarized:

Now I can just sit here and enjoy it and enjoy performing. put myself through a lot to get those performances out of myself and out of the band. And also, too, with the words backing up the music, I finally had to step up and be a bit more honest with myself and my audience, as well. 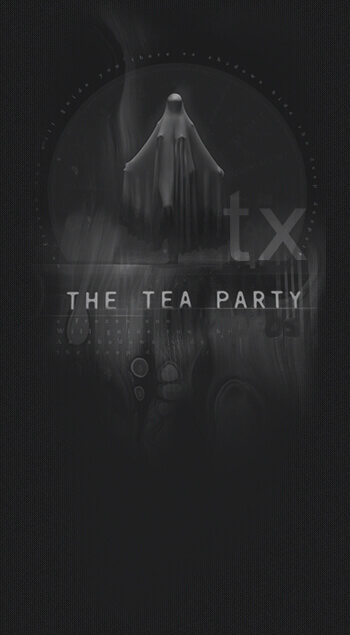 This site uses essential cookies. These Cookies are necessary for the proper functioning of this Website and are used to store sessions and preferences. We use Google and Adobe Services and to improve the functionality of this website. These Servies may set cookies to be able to deliver their servives. We don’t have access to these kind of Cookies.
Fact is:  we don’t use any Cookies to collect datas from you, beside the ones from 3rd parties, on which we have no influence on. We don’t set any Social Media, Analytics or Adverstising cookies.
By accessing this site, you consent to the use of cookies. For more information, refer to our privacy policy

I understand and agree